A Room of Her Own 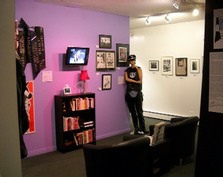 As I began work for the first exhibit installation of the Women’s Leather History Project, I was excited that we were both literally and figuratively making room for Leatherwomen’s history in the LA&M. It was out of this line of thinking that “A Room of Her Own” emerged, building on Virginia Woolf’s 1929 feminist text that argues for women’s need for space to think and create. 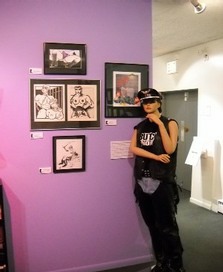 Modeling the exhibit on the living room of a Leatherwoman, I carefully selected pieces from each of the museum’s existing collections that represent the diversity of the women’s Leather community, highlighting a cross-section of Leatherwomen’s social identities (gender, sexuality, race, ethnicity, etc.) as well as time and geography. Of course, not every woman’s story is represented here, but the goal is that every woman, and, in fact, every person who visits might see themselves reflected in some part of the exhibit, whether it be through pictures, t-shirts, leathers, books, magazines, videos or memorabilia. So, if there is something “missing,” please consider how donating your personal story or archive to the project would help us make our archives and future exhibits more complete. 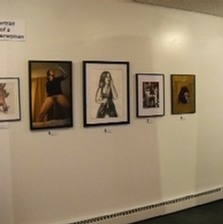 As I was gathering artifacts for the exhibit, I was particularly struck by the artwork by and about Leatherwomen—in particular the fact that almost every single piece in the museum is of a singular woman. Visitors are invited to ponder why this might be and what it might mean as they take in “Portrait of a Leatherwoman” on the side wall. 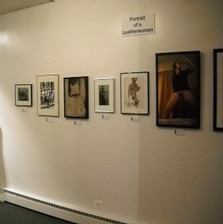 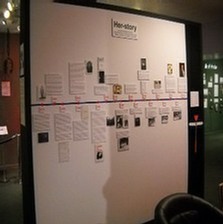 As much as I wanted to make the space inviting and welcoming, I did not want to leave out the historical component of the project, which is why the back wall became the timeline of Leatherwomen’s history. It represents a sliver of five years of archival research and dissertation writing, piecing together our history from newspapers and newsletters. It, too, is necessarily incomplete. This history is just beginning to be recorded and written. We need more archivists, historians and money. We need more people willing to donate their time, treasure and talent to the project of preserving our history. 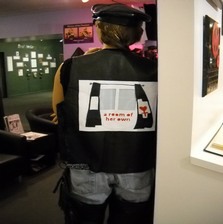 To that end, Roxanne, who is still out at the bar, and Chris, who is here at home, invite you into their living room, to sit and stay a while with Leatherwomen’s history, to learn, to share and to make sure that our history is never forgotten.