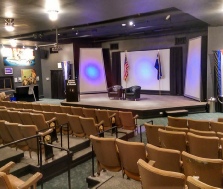 The auditorium is used for the LA&M film series, Cinekink, the German Fetisch Film Festival, contests such as American Brotherhood Weekend, Mr. Chicago Leather, Illinois Leather Alliance, demonstrations, lectures, community meetings and is made available for leather clubs and groups to use free of charge including the Chicago Leather Kennel Club, Windy City Boys Troop, The Next Generation Chicago (TNGC), Chicago Leather Club and Chicago Hellfire Club among others. 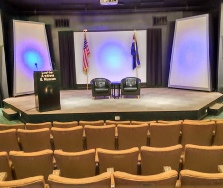 The murals in the first Gold Coast were actually painted on the walls of the bar. When Chuck and Dom lost their lease, they had to remove the murals by using paint remover or by painting over them. Some beautiful pieces were lost forever. When the Gold Coast fond it’s new home, Chuck and Dom decided to paint the murals on these 4’ x 8’ panels so if they ever had to move the bar again, they could save his works. Good thing too, the gold coast had five locations before the name was finally retired in 1988. 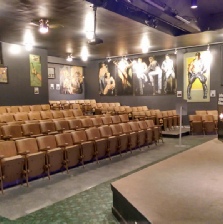 Even in the face of a tragedy, Chuck can always find humor. Zolar’s was a Disco that Chuck and one of his “boys” opened in the 1980’s. The bar was located near a Chicago “L” track, a spark from a passing train lit the bar on fire and it burned to the ground. Being a new business, Chuck had not yet obtained insurance and the business and building were a total loss. This mural was the only thing saved from the ashes. If you ask Chuck today about Zolar’s, he will tell you the bar’s motto “Zolar’s, it’s magic, Zolar’s, it’s tragic.” The mural was displayed in the Man’s Country locker room until 2006 when it was moved to the Etienne Auditorium.