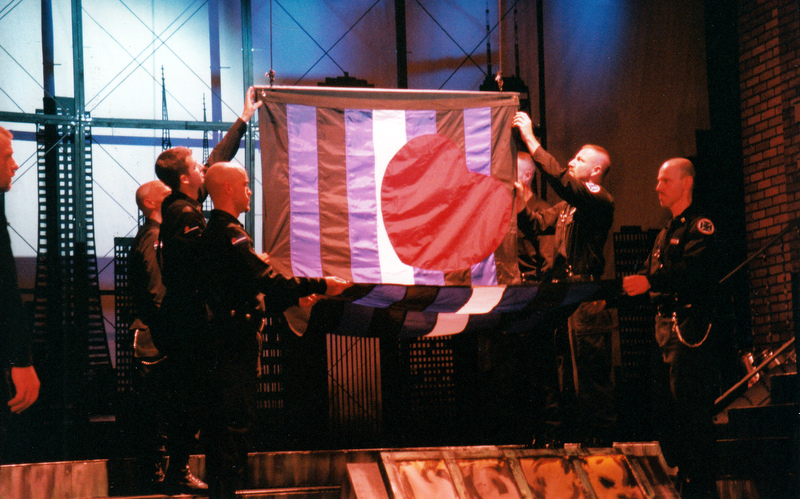 The most widely celebrated of Tony DeBlase's achievements in the world of leather is and probably always will be the Leather Pride Flag which he presented to the world as a "proposed design idea" on May 28, 1989, at International Mr. Leather. As the creator of the flag, he was often asked to explain the colors and design, but consistently refused to do so, insisting that each person could do that for himself. The design was immediately embraced and began appearing in parades within a month of its introduction, and turned up in shops as a bumper sticker barely two months later. Deconstructions and re-compositions of the flag's familiar black, blue and white stripes with a red accent-originally a heart-are common, but the design itself was accepted worldwide as introduced.

These photos are from International Mr. Leather 1999 when Tony Presented one of three original Leather Pride Flags which he assembled as a prototype to the Leather Archives & Museum. the flag was received on behalf of the LA&M by the Men of Discipline. 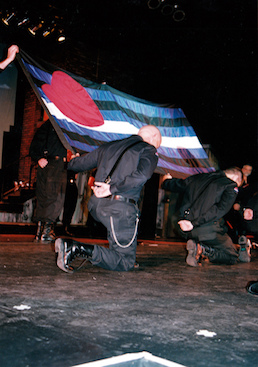 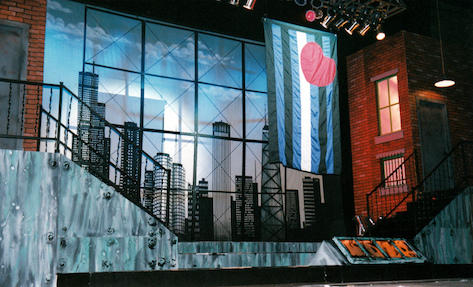 "The rainbow flag has become the symbol of Gay and Lesbian pride and I have been proud to wear it on my clothing, march behind it in parades, and hand it from my balcony. I was thrilled by the rainbow colored balloons used in the opening and closing ceremonies of Gay Games II and the spectacular rainbow of balloons that arched over the main stage at the G&L pride rally here in San Francisco a couple of years ago.

For the 20th anniversary of Stonewall I felt that the time was right for the Leather men and women who have been participating in these same parades and events more and more visibly in recent years, to have a similar simple, elegant banner that would serve as a symbol of their own identity and interests. I decided that calling a committee meeting to design it would be counterproductive, so I just did it. I consulted with most of the staff here at Drummer and some of their suggestions were incorporated. I do not expect this design to be the final form, but the basis from which a widely accepted banner will evolve.

A prototype was constructed and displayed at the International Mr. Leather contest in Chicago on May 28. It seemed to be enthusiastically welcomed. I am having a few more flags manufactured. Drummer will be presenting one each to the Leather men and women of New York City and San Francisco. I have asked GMSMA to be the custodian of the former and The Society of Janus and The Outcasts to be the custodians of the latter. With luck both flags will be ready in time to be carried by the Leather contingents in each of these two major pride parades. Drummer will also donate flags to the National Leather Association and to Chicago Hellfire Club. Both of these are groups with which I have been intimately involved for quite some time and both host major events for the Leather and/or SM community.

The flag is composed of nine horizontal stripes of equal width. From the top, and from the bottom, the stripes alternate black and royal blue. The central stripe is white. In the upper left quadrant of the flag is a large red heart. I will leave it to the viewer to interpret the colors and symbols.

Desmodus Inc. has a copyright on the design and anyone wishing to use it for purely commercial purposes must receive our written approval. However, we welcome members of the Leather/SM community to use the design for flags, banners, pins, T-shirts, printed material, etc. to be distributed free or sold at cost, or to be used for fund raising for not-for - profit causes that benefit leather men and women. No permission is required for these uses but we do ask that you inform us of the use and, where possible, send us samples.

We have had cloisonne pins made. These are about I " wide and are available for $5 plus $1.50 S&H from the Sandmutopia Supply Co. Photos of the flag at IML, and hopefully in the parades as well will be in Drummer 132. "

Initial reaction to the Leather Pride flag was mixed. Some, particularly on the east coast, reacted positively to the concept, but were quite concerned, some even offended, that I had not involved the community in helping to create the design. I emphatically did not want to have a design competition, in which each and every losing entry, and all of his/her friends, would oppose the winning entry. Nor did I want to have a design committee. Just selecting the members of such a committee was an invitation to the guillotine. Instead I decided to just go ahead with my design.

I asked one of the staff members at Desmodus to translate my ideas into a drawing, which he did, with many alternatives. He did not like the design and thought that the heart was particularly trite. I did incorporate one of his recommendations, because he managed to convince me that it was an improvement on my original design, and I still agree that he was right on this. I originally had the central stripe red. But he pointed out that the tip of the red heart, bleeding into the red stripe, would not "read." I agreed and told him to change the central stripe to white. Though he recommended many others, that is the only change to my original concept that I accepted.

Elsewhere the reactions were more positive. Susie Shepherd, who was International Ms Leather when I made my presentation in Chicago, phoned me shortly after I got back home and asked permission to make a flag for the Portland OR gay pride parade. Naturally I gave her permission and sent her a copy of the above editorial, along with the blueprint-like drawing of the flag that was included with it, and she had a flag made and it was carried in the Portland OR Gay and Lesbian Pride Parade a week before those similar celebrations in New York City and San Francisco.

The flag I donated to GMSMA was on the back of the jeep carrying Guy Baldwin, the reigning IML, for much, but not all, of the parade. I received a letter from Barry Douglas, the newly elected Chairman of GMSMA, dated June 27,1998, thanking me for the gift, and telling me of the various conflicted reactions it had drawn. But he concludes by saying "We will keep the flag safe and bring it out for the appropriate events..." A GMSMA member told me several years later that, not long after June 1989, his lover had found the flag in a pile of trash at the Community Center where GMSMA meets, and had taken it home with him. I have no idea where this original run of the LPF now is. I asked GMSMA more than a year ago if they still had it, and have received no response.

On the West Coast the flag was carried in the Pride day parade in San Francisco and then was prominently displayed in the Shotwell meeting space used both by the Society of Janus and the Outcasts. The Shotwell meeting house closed several years ago and the Outcasts disbanded a few years ago, so I was greatly relieved when a recent inquiry to the Society of Janus indicated that they still have the original flag I donated ten years ago. I agreed that the next time I am in San Francisco I will autograph the flag for them and they will enter it into their organizational archives.

At Chicago Hellfire club, the man in charge of Inferno refused to fly the flag in 1989 because it was "too controversial," however, in 1990 it was flying in spite of his objections. And it has been visible there and at the CHC clubhouse ever since. NLA has displayed the flag proudly at every Living- In-Leather conference.

The first adaptation of the flag to come to my attention was in December of 1989 when I found Christmas tree ornaments for sale at Wom Out West on Castro St. that were clear glass balls to which someone had applied strips of cloth in the flags' colors around the diameter of the ornament, and added a tiny red heart on one side. Chuck Higgins, who was then Mr. SE Leather, was the first to wear the flag in any form other than a pin. He had it made as the back panel of his leather vest.

In 1990 Laurie Lane of Leatherworld in Melbourne Australia applied the southern cross constellation from the Australian flag to the Leather Pride flag to create a uniquely Australian version. And in 1991 the Melbourne Leathermen became the first organization to incorporate the leather pride flag design elements into their club colors. A few years later, TLFMC of Anchorage was the first of many organizations to use the flag's stripes to fill in a state outline and use the heart as the marker for their city's position in the state.

In May of 1991, I was quite surprised, & pleased, to see that the International Mr. Leather sash had been made in the image of the flag. In October of that year a group of men from Toronto exhibited a huge Leather Pride Flag with a row of red maple leaves running through the white stripe. I am told that that flag still exists and is seen occasionally at events in Toronto, but apparently it is the only one ever made. I have also seen a version with the heart replaced by a red maple leaf.

Many people, particularly titleholders, began to use the flag on their business cards, on brochures, newsletters, websites, and in other ways. Leather makers sewed colored leather into back patches and back panels. and western style shirt makers created designs in fabric to truly wear the flag. I have seen the flag with the heart replaced by a red computer console used as the logo for a leather computer club and I have seen the heart replaced by a red roast turkey for a Thanksgiving invitation.

Other than the Christmas tree ornament, one of the first interpretations of the flag I saw was a huge flag composed of appropriately colored bandannas filling the window of a leather shop in San Francisco during Leather Pride week. One of my favorites is a T-shirt design suggesting the flag by depicting bandannas tied to the clothes line by one comer and hanging as stripes. with the red one knotted around a blue one. I love my Jeanette Heartwood buffalo flogger with its leather pride handle (Thank you Jeanette and Dale!) And the interpretation that still ranks very close to the top of my list of favorites is the logo used for the Leather Celebration during Stonewall 25 in New York City: the Manhattan skyline superimposed on the flag. I am delighted by each new interpretation I see.

I thank you for your acceptance of the flag. I remain glad that I never have explained my reasons for the design elements. As I said in my original presentation "I will leave it to the viewer to interpret the colors and symbols." I have heard many wonderful interpretations over the past ten years. And all of them are much better than my original reasons! I am looking forward to celebrating the 10th anniversary of the leather pride flag at International Mr. Leather, May 30,1999, in Chicago.